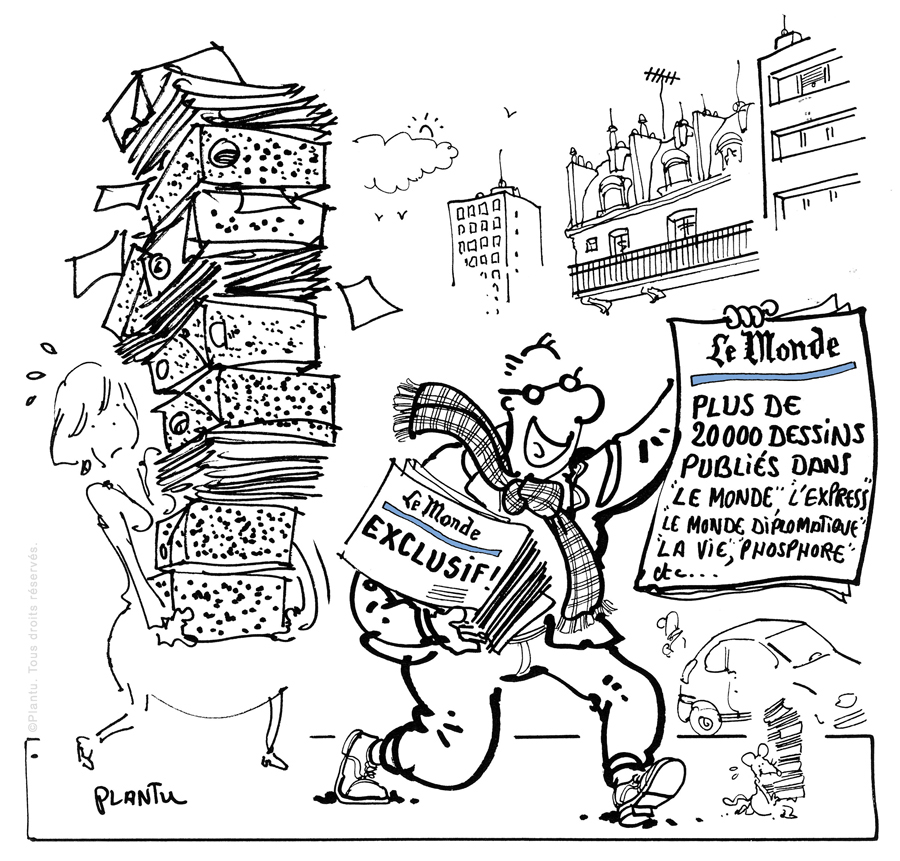 By Maite Leon, Plantu’s collaborator at Le Monde newspaper from 2009 to 2021

I started working at the French daily Le Monde in November 2009, and this was the beginning of a new archiving system and an eleven-year endeavor. These were not just any archives, but quite simply 50 years of original press cartoons drawn by Plantu, an editorial cartoonist and caricaturist at Le Monde since 1972 and with whom I had the pleasure of working, until his retirement from the newspaper, in March 2021. This is how it all began.

One rainy winter morning, someone from general services called me to ask me what to do with the Plantu boxes lying around in the fourth basement. On the spot, I discovered, piled up in a corner, boxes filled with speckled archival boxes, scattered around, containing documents. To my great surprise, some of them were torn open and their contents were spread out on the floor: these were not just any documents, but original ink drawings! I immediately asked that these boxes be stored in my office, which had a lock. I told Plantu, who couldn’t believe it: he thought that his boxes were well protected, and not in a storage room, with all sorts of old furniture, accessible to anyone…

Once the boxes were safely stored in my office, I began a brief inventory: 40 blue and green speckled cardboard boxes, each containing about 200 original ink and marker drawings, in addition to the 65 other boxes already in cabinets in my office, for a total of 21,000 drawings, according to a first estimate. On closer inspection, I noticed that some of the boxes corresponded to published books: they contained originals, but also copies of drawings filed in other boxes. At the time, it was easier for Plantu to find a drawing according to the book in which it had been published. It was therefore necessary to sort the contents of all the boxes, remove all the duplicates, and refile everything according to their indexing number.

The first work of indexing the originals was carried out by Plantu himself in the 1970s and, from the 1980s, by Brigitte Rocquin, his assistant at the time. An identification number was assigned to each drawing. I will describe the archiving procedures used over the years on all of his work, both for the paper archives and the digital archives.

Plantu published his very first drawing in La Vie du rail on September 13, 1970. In the 1970s, he also published his drawings in VRP syndicaliste, Génération, Panurge, Pourquoi pas, Pariscop, Un plus un, Bonne Soirée France and Belgique, Télé magazine and he started working for 30 Jours d’Europe. These were mainly drawings in Indian ink executed with a very fine Rotring pen. They were stored in archival boxes labeled as follows: the number of the box, then the indexing numbers of the drawings (first and last) and, finally, the dates of publication (of the first and last drawing). In septembre 2019, there were 123 boxes.

He published his very first drawing in Le Monde, in the edition of the daily newspaper dated October 1 – 2, 1972 (fig.1). The original drawing in Indian ink was part of a donation of 500 original drawings, intended for the collection of the Department of Archives and Prints of the National Library of France (BnF).

The original drawings from the 1980s usually did not have a publication date, only the index number and a few keywords. Centralizing and cross-referencing all the information in an Excel file made it possible to cross-check the data from the paper drawings and the digital images in order to identify, date and classify them in the archive boxes and in the digital files.

Plantu published his first drawing in L’Express, on February 7, 1991. The first drawings published in the weekly were in black and white and the addition of color was done gradually. Plantu had to provide meticulous indications for the placement of colors to the photo engraving: they were flat areas or vignettes with precise indications. Here is an example of an archive drawing declined as follows: the copy of the original drawing with the necessary indications (fig.2), the original drawing in ink (fig.3), a copy version colored in felt-tip pen (fig.4) and a layout template for the printmaker for the color setting (fig.5):

The format of the original drawings changed, and sometimes Plantu made a drawing in several parts: he could now scan them easily, which made his work easier. The archived drawings had more elements: the color copy of the drawing as it was published in the press (fig.6), then the original drawing in ink in A4 or even A3 format (fig.7), drafts in black and white or color felt-tip pen (fig.8 and 9), color or black and white flat tints which were used as an indication to the printmaker for four-color printing (fig.10), as well as sometimes, a color copy of the front page of Le Monde with the drawing: 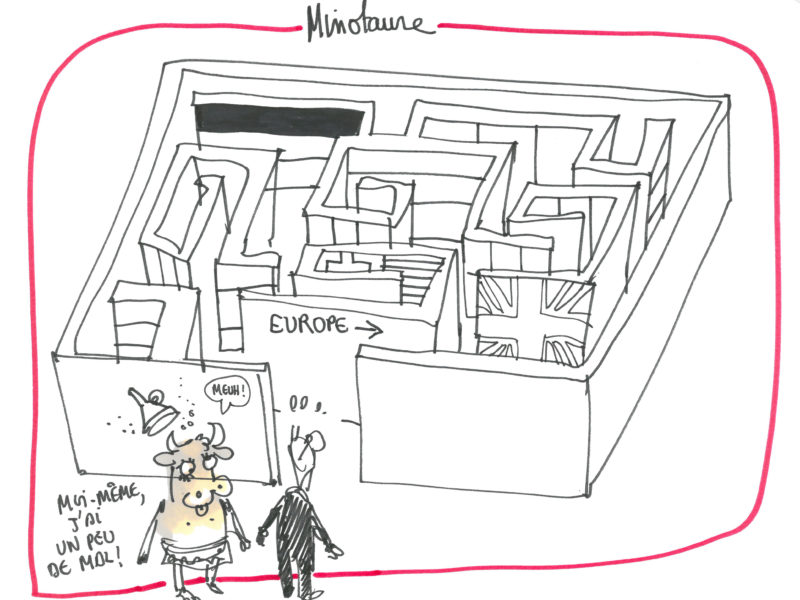 The digital archiving of Plantu’s drawings was done in the 2000s, once the technical means made it possible. As the scans of the drawings at the time had insufficient resolution, it was necessary, starting in 2009, to rescan a large part of the collection, in particular the color versions of the drawings as they had been published. Subsequently, we undertook to scan the black and white (BW) originals and the drafts from the 2000’s that existed in paper format but had never been scanned, that is to say nearly 20,000 images in JPG format at 400 dpi.

The color images in JPG format were stored on a server that I shared with Plantu. This server had two main folders: a thematic folder, where each drawing was classified by theme, for example “Emmanuel Macron”, “Human Rights”, “Democracy” or “Society”, which currently contained 450 thematic folders and about 66,000 files (JPG drawings, PDFs, i.e. a volume of 77 GB of documents) and a chronological folder where all the drawings (without drafts) were classified by year and month, and which comprised almost 25,000 drawings.

In order to optimize the classification of the images and to harmonize their indexing, I set up a simplified system for the naming of the image files in the following form: year, month, day, theme/keywords, publication medium and the file resolution:

In February 2013, I asked Odile Gaultier Voituriez, head of the archives at Sciences Po, for advice on the most efficient archival software, particularly those capable of processing images and associated metadata, in order to find the most suitable method for our internal use of Plantu’s archives. This led me to create at that time an additional and complementary indexing source outside our shared server: a “NOMENCLATURE” folder which gathered all the colour JPGs, the JPGs of the originals, and the JPGs of the scanned drafts, classified by indexing number in 22 folders divided by thousands, ranging from zero to 22,000, in the following format: indexing number, year, month, day, theme/keywords, publication medium, image size:

In 2009, I created an Excel spreadsheet that centralized and summarized all the data for each drawing in 11 columns as follows: index number, publication date, caption (dialogue or description of the drawing), keywords, status (published/unpublished), publication (title of the publication medium), books (in which the drawing was published), notes (various information about the drawing, whether it was given or sold, etc.), presence of the original BW (Yes/No), appendices (details about the nature of the appendices, drafts, colour plates, copies). ), the presence of the original BW (Yes/No), the annexes (details on the nature of the annexes, drafts, colour plates, copies). In March 2018 I added an additional column to list the 500 drawings donated to the BnF and, in 2019, a new column (in purple) for a precise count of the originals.

This database, which was updated on a daily basis, took several years to complete. By cross-checking the data with the “Nomenclature” file, it became possible to find and correctly date up to 80% of all Plantu’s published drawings.

Over the years, Plantu had consistently listed the publications of his drawings in various media. This meticulous work allowed me to find the dates and media of publication of all his works, as well as to recreate his collection of originals by including copies of the missing drawings. This research took years and required the occasional help of interns.
From 1970 to June 1972, Plantu’s drawings were filed in spiral photo albums (fig.11). He marked the date and medium of publication. The index numbers in red were added in 2018 (fig.12).

Later on, Plantu chose Clairefontaine notebooks numbered from 1 to 87 in which he cut and pasted his press articles, sometimes mentioning the date and medium of publication. The index numbers and missing dates were added in red in 2018, for indexing purposes (fig.13).

The tools we had mainly used since I joined Le Monde were: a XEROX and then a KONICA high-resolution printer, which enabled us to make scans and colour copies of the drawings in 400 dpi. All image processing (cropping, cleaning, file naming) was done on Photoshop, on MAC OS X and the data recording in the Excel database was done on a PC, Windows 7 Pro.

Plantu’s archives also included his entire bibliography (more than 65 published personal collections of press cartoons), also listed in digital form, and the interviews. The paper versions were in the press-books, but the filmed videos and recorded broadcasts were saved on hard disk. There was also a paper and digital archive of all his exhibitions, some volume works and sculptures, stored in a special room in Le Monde and after the newspaper’s relocation in 2020, on another location, along with administrative files and letters from readers.

Plantu’s work is extremely rich, as he is a very prolific cartoonist, and we felt it was essential to complete this archiving work. This has enabled us to quantify, identify and find all of his publications, more than 90% of which are now in the archives. I would like to thank all those who facilitated this work, the team from Le Monde‘s IT department, who were able to solve all our technical problems, the occasional contribution of trainees assigned by the BnF, and volunteers, who took some part in sorting and classifying the originals, in the computer processing of the images, and who helped to feed our database. We would like to thank Laurence Engel, President of the BnF, as well as Martine Mauvieux, who was in charge of the collections of press drawings in the Department of Prints and Photography, where the entire collection was stored. It has been a real challenge to carry out such a large-scale archival work, which we hope will be a goldmine for researchers and beneficial to future generations.